The Legend of the Dandelion 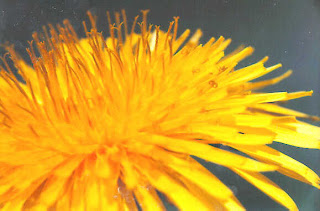 The Flower Fairies sent they're gentlest and kindest of spirit fairy to settle the problem and to give one plant her blessing and the title of the "most perfect" flower. The little Fairy decided to test each flower by asking them one question.

The first flower the Fairy talked to was the Rose.
"Where would you most like to live?" she asked it.
"I would like to climb the castle wall." said the Rose. "And then kings and queens and nobles would pass by everyday and exclaim over my beauty, my scent and my delicate nature."
The Flower Fairy walked sadly away from the Rose.

Next the Fairy came to a tulip, standing tall and proud. "Where would you most like to live?" she asked the Tulip.
"Oh, I want to live in a public garden" said the Tulip. "Where everyday people would come and admire my wonderful colors and see how straight and tall I stand." Once again, the Fairy walked a way feeling sad.

She walked until she came to a forest. There she found some Violets. She asked them "Where would you most like to live, little Violets?" "Oh" said the violets quietly "We like it here hidden in the woods where no one can see us and where the trees keep the sun from dulling our beautiful color." The fairy thanked the Violets and walked on looking for more flowers to talk to.

She talked to the Tiger Lily who was much too wild and fierce.
She talked to the Sunflower who barely answered her because all she wanted to do was be warmed by the sun.
The little Flower Fairy talked to the Orchids who only wanted to be taken out to dances and she tried to talk to the Narcissus but it was too busy looking at it's reflection in the water to speak to her.

The little Fairy, with tears in her eyes, was ready to give up and go home when she came to a field with bright fluffy yellow flowers on long thin stalks. The leaves were long and jagged and very close to the ground. But the flowers....oh how happy and cheerful they looked in the field!

"Little one" said the Flower Fairy "What are you called and where would you like to live?"

"I am a dandelion" said the little flower."I'd like to live where ever there are children. I want to live beside the road, and in the meadows, and push up between the sidewalks in the cities, and make everyone feel happier when they see my bright colors." The Dandelion chattered on happily saying "I want to be the first flower that the children pick in the spring and take to their mothers. And I could tell if a child likes butter by being rubbed under their chins, and if a child makes a wish and blows my seeds, I could carry that wish on the wind."

The Flower Fairy smiled brightly and said "Little Dandelion, you are the most perfect and special flower of all and you shall have your wish! You will blossom everywhere from spring till fall, and be known as the children's flower."

And this is why the dandelion comes so early and pushes her head up everywhere with such strength and determination. And why she is so loved by children throughout her long life.

Dandelion Trivia:
It is said that after Theseus, the Greek hero, slew the Minotaur, a monster that was half man and half bull and lived in a labyrinth, he ate a Dandelion salad.

The number of inches a child will grow in the coming year is said to be foretold by the tallest dandelion stalk he can find.

Dandelions were declared an endangered wildflower in England.

How to Make a Dandelion Chain

Supplies:
Dandelions (with thick stems)
Xacto Knife or small sharp scissors (for adults or older child only)
Lots of imagination!

Step 1: Pick dandelions with long, thick stems, one at a time.

Step 2: Make a short slit halfway down the stem of one dandelion.

Step 3: Insert the stem end of a second dandelion into the slit and push it down through the first dandelion as far as it will go.

Step 4: Make a slit halfway down the second dandelion and insert a third dandelion.

Step 5: Continue until your chain is a little longer than you want it to be. Tie the last stem to the first dandelion near the flower.

Expect the flowers to wilt quickly.

Did you know?....Dandelions are sensitive to the weather. In good weather the head is fully open but if rain threatens it closes up. Also, the dandelion is said to close up against the dew around 5pm and to open up again at 7am. (Wonder if that's why it's called a clock?) Although this behaviour is said to depend on the intensity if the light so the times differ at different lattitudes and seasons.

Posted by La, Storyteller/Storysinger at 8:54 PM

Picture Books about Food and Cooking

"It ought to be the rule, rather than the exception, that young children listen to, read, act out, and discuss fairy tales, myths, legends, folklore, heroic adventures, biographies, and stories from history."